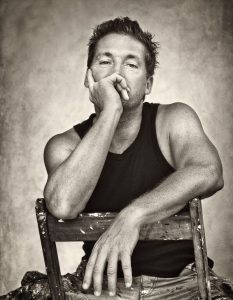 Art has always been a part of Peter’s being. There were no defining or pivotal moments which
determined the course of his life. His need to paint has always been as vital as breathing and eating; providing necessary fuel for the mind and soul.

His passion for people was reinforced through years of travel after graduating from Textile Design School in Belgium. Peter uses his unique style to capture emotion, mood and feeling through pallet knives and acrylic paint on large scale canvas.

Peter’s disciplined approach to his art is reflective of the same dedication needed for his other passion as a triathlete and his core belief that life is beautiful.